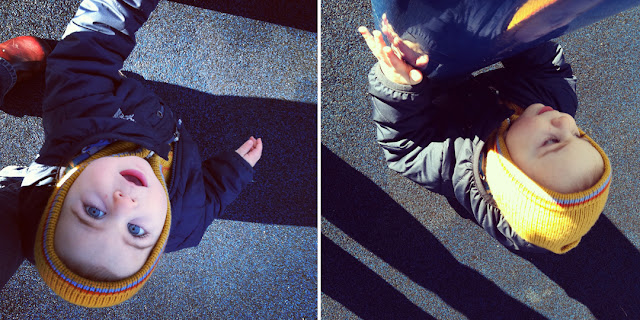 We had another one of those crazy warm days where it feels more like spring is around the corner than the dead of winter. I was tired but I knew we should get outside since so many days are too cold to venture out and being housebound with a toddler (when your house isn't that big) is challenging.

We drove into Cambridge to a park by the river. It's across the street from the apartment that I lived in for eight years when I first moved to the city. I was on the fifteenth floor and had an amazing view; steeples of Harvard buildings, the Charles river, and this park.

Our park routine is pretty well established, we head straight for the swings, I plop Little Smith in one of them and we swing... and swing... and when it's time to get out he cries and reaches back, hoping he'll get a few more pushes. It usually works.

I lifted him up and tried to pull his legs through the openings in the rubber saddle, but this time he flailed and started crying. I gave him a few pushes and he still cried. I lifted him out and we stood for a moment watching another little boy on his own swing.

We walked over to the area of soft foam rubber where water sprays from a pole in the summer. Little Smith got down and stood holding onto the pole. Then he started walking, exploring the limits of the park, going in circles. He's gotten better and better at walking each day so this wasn't really new, but somehow looking at him all on his own, away from me in this open space, making his own decisions, it all felt very different from where we've been. 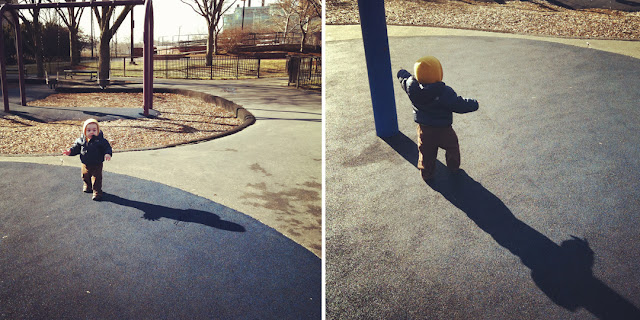 It's not just that I'm surprised that he's growing up and things are changing, although I guess it always does surprise me how fast it all happens, it's that we've been so connected this past year. I've been lucky to be home with him and we really haven't been apart so far. At home he's been crawling then walking free for months but out in the wide open world he's clung to my side. I carry him. I push him. He's part of me. Now I can see that we're two separate people. He's running in circles in the park and I am standing alone, watching, separate.

Little Smith turned fourteen months this week and this month has without question brought the most change. He learned to walk, he is talking more and expressing more of his own thoughts and desires. I'm incredibly proud of him and excited to watch as he grows into himself and apart from me, but as much as it's beautiful and natural, it is also painful.

He toddles to the edge of the park where the fence separates the grass from the swings. He reaches for the wrought iron rail and falls forward, hitting his forehead and sliding to the ground in tears. He's only a few steps away and I scoop him up in my arms. He clings to me and stops crying. We're separate, but we're still together.
Posted by Mama Smith at 11:36 AM