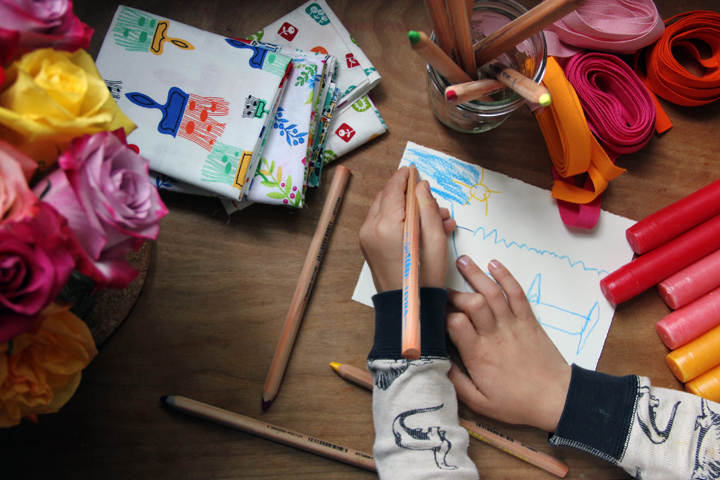 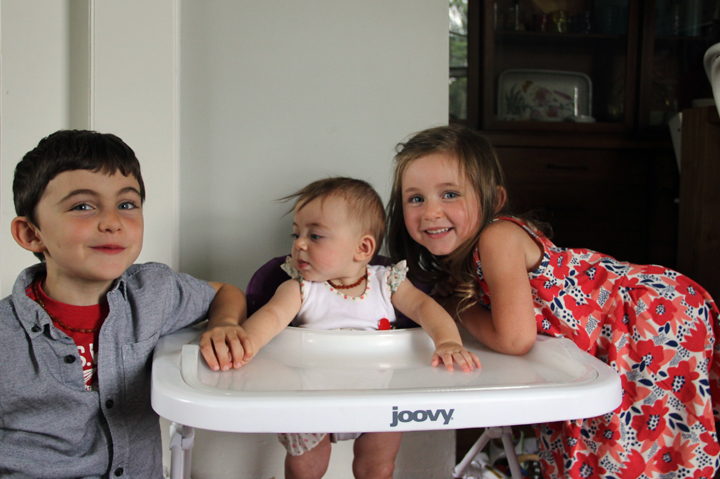 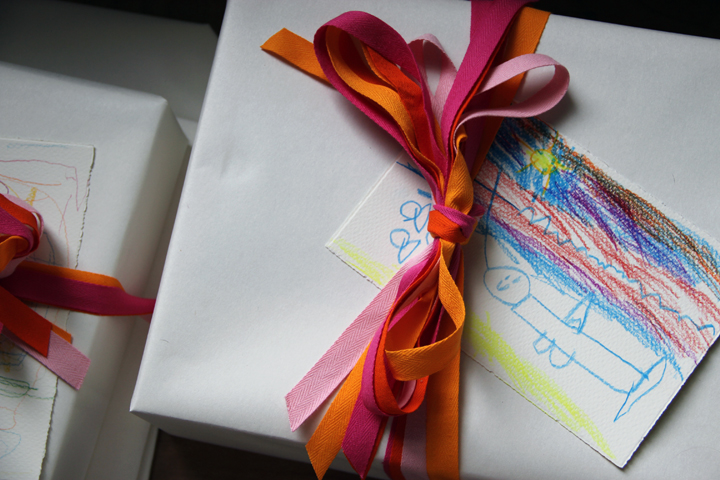 It's been so long since I've written in this space that I sincerely forgot the logistics of how to do it, and the most obvious place to pick up is with the news that we had a baby girl... 6 months ago! She is beautiful and sweet and absolutely adored by her big brother and her big sister. There is so much more to say, but in truth the real push to resume blogging was that our Roo turned four. She wanted her birthday documented and recorded here, just as it always has been, and you just don't say no to Roo. So here we are :) 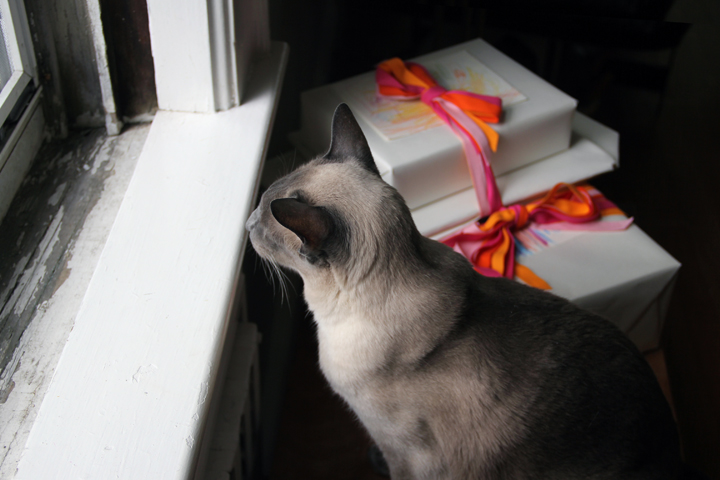 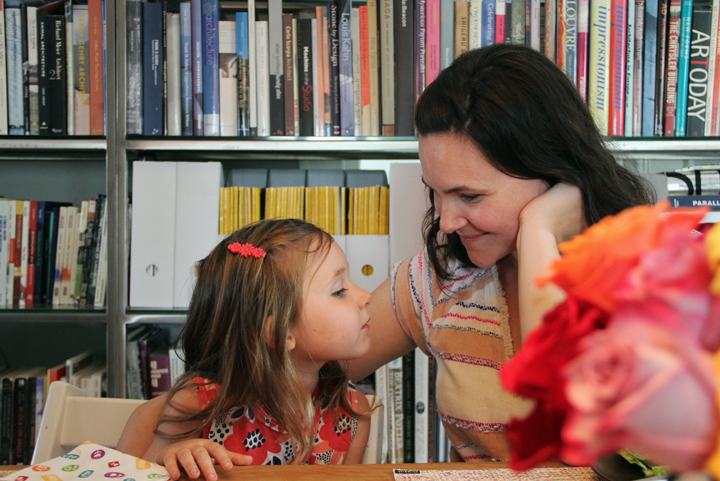 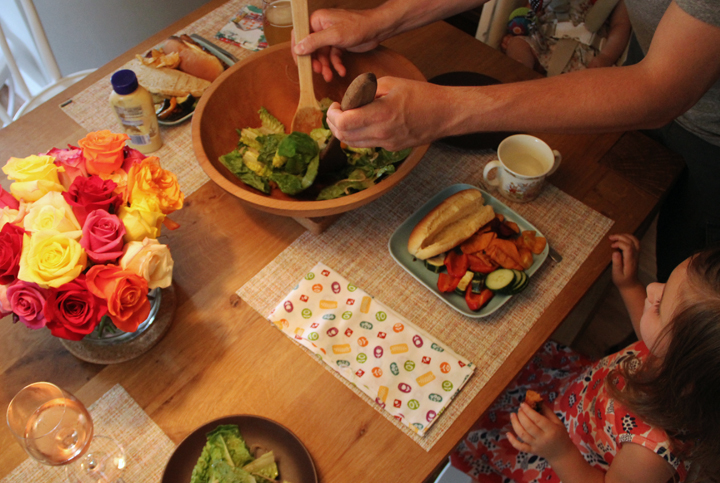 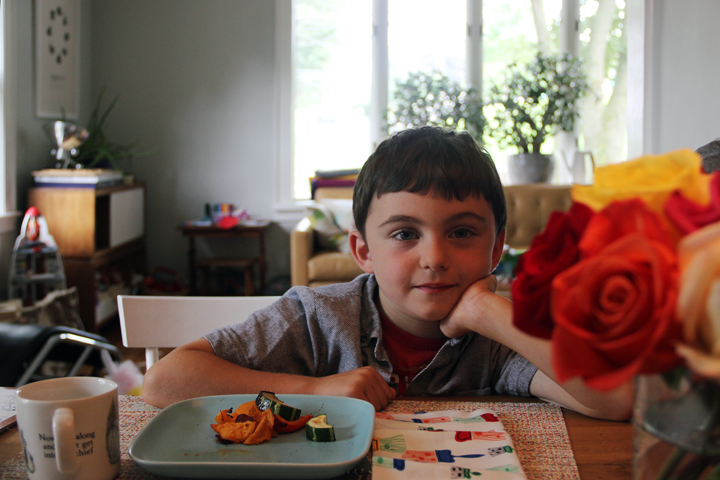 I was convinced that this would be the year in which our social butterfly demanded a 'real party', complete with a kid guest list. Maybe our family is big enough these days to warrant a party all its own, or maybe she just loves a good tradition, but she wanted nothing more than our family barbecue (and presents, and decorations, and rainbow cake!), and we were all thrilled to give her everything on her list.

I said it last year and it remains true, she takes such joy in everything that it really does make throwing a party in her honor a complete pleasure. She was so excited from the moment she woke up. She helped me make her 'rainbow cake', (or as rainbow as natural food coloring afforded me), she helped her pop with the barbecue, she selected outfits for Smith and her baby sister (let's call her Lo ;)... and she was basically bouncing off the walls, giddy with being the center of attention. As it turns out, she has the perfect personality for a middle child, no one will ever forget this girl- she won't let them. 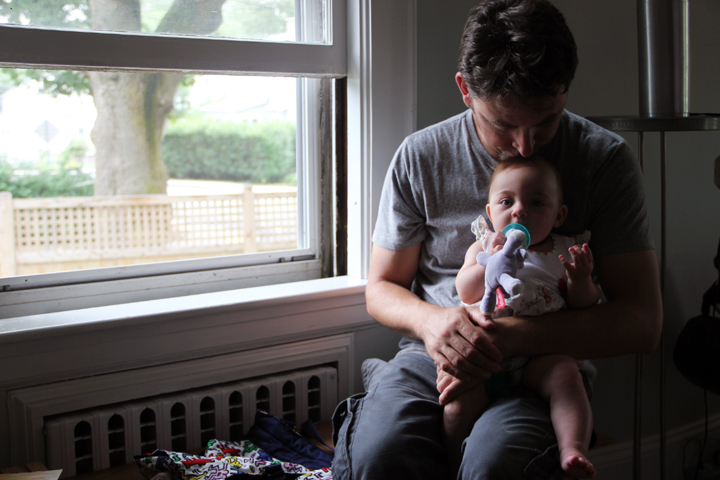 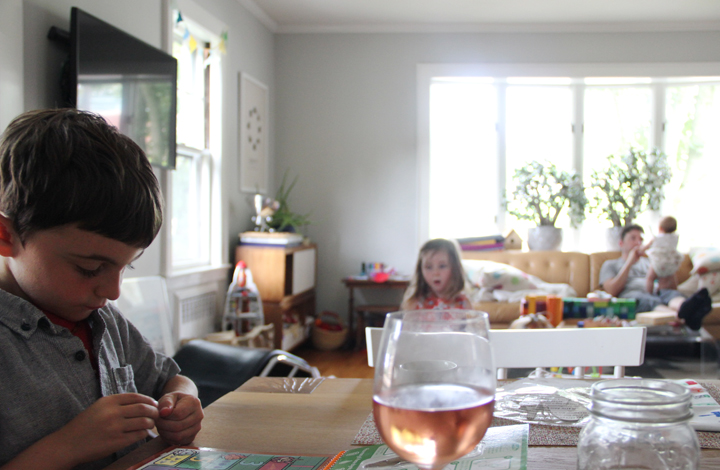 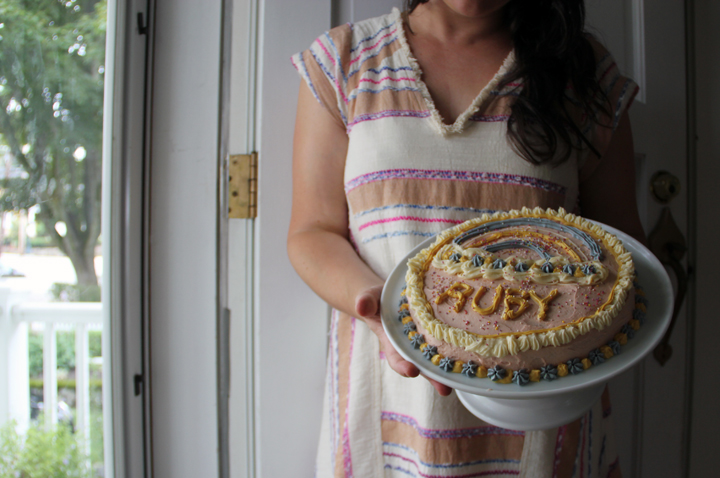 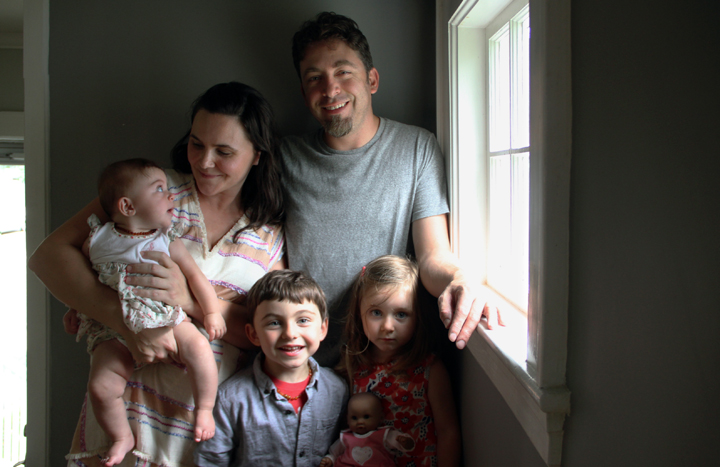 My favorite part of the day was our afternoon walk, Roo with her new babydoll strapped on in her new sling (this Keith Haring Ergo, I'm so jealous!), me with my baby strapped on... we all decided that the birthday girl would lead the way, which predictably ended in us getting lost, a storm rolling in, cutting through a few private lawns, a little bickering, and lots of laughs. 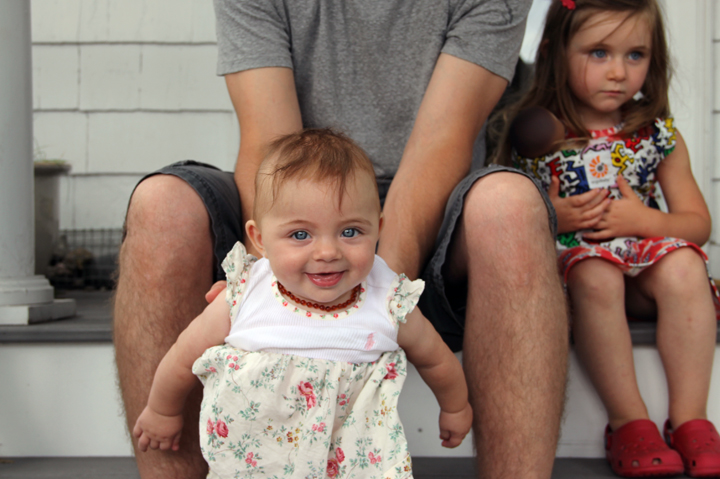 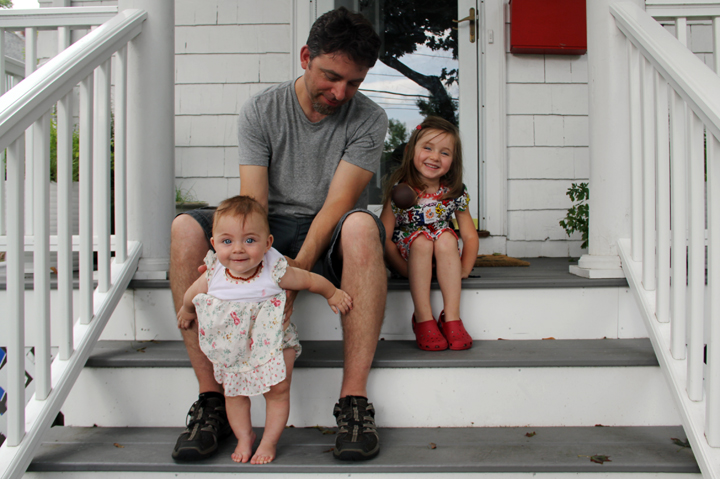 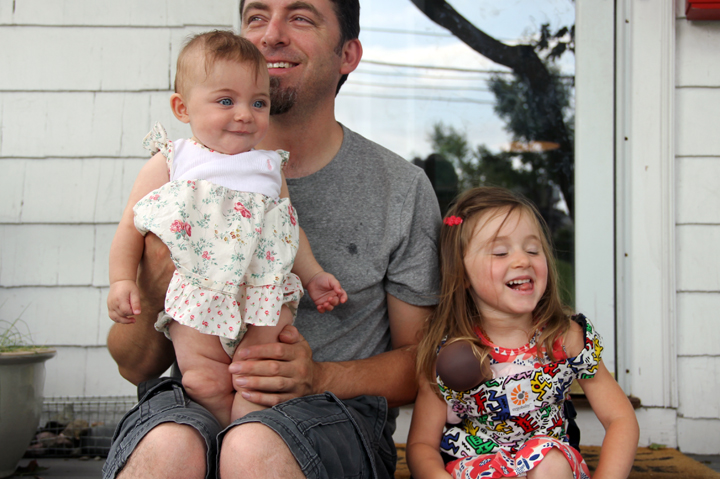 This has been such a gigantic year for our family and our girl; she started preschool, became a big sister, navigated the emotional landmine that is three... it was a workhorse of a year, not always easy (for me or for her!), but full of growth and productivity and there's so much good to show for it. 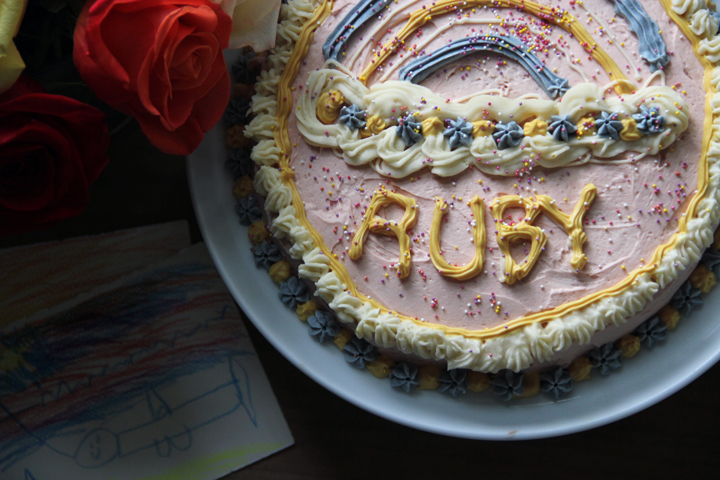 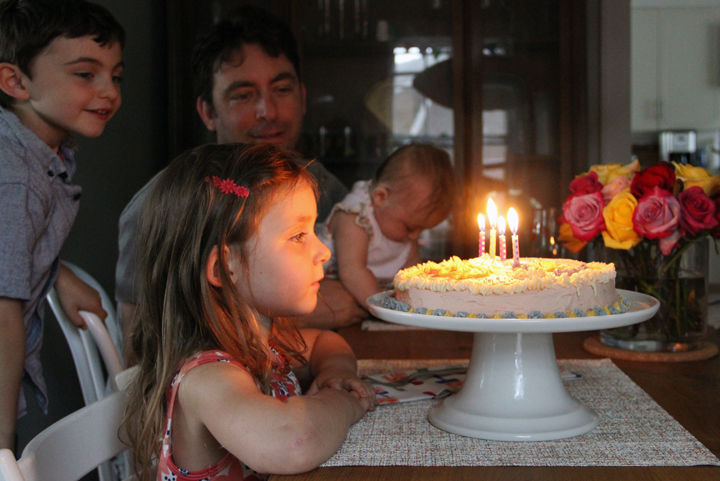 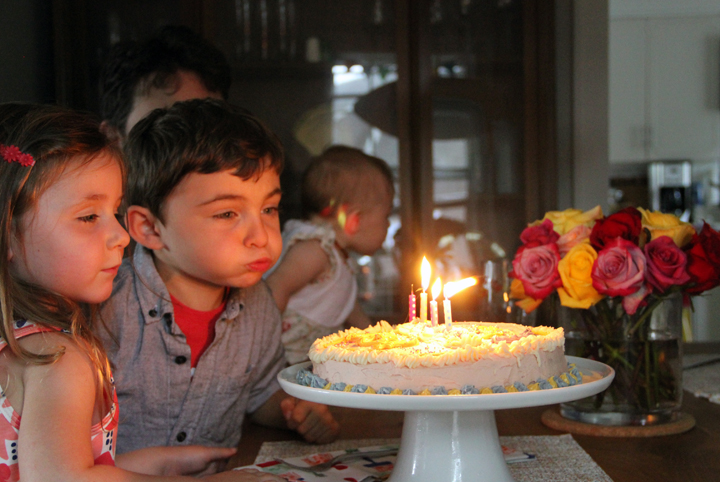 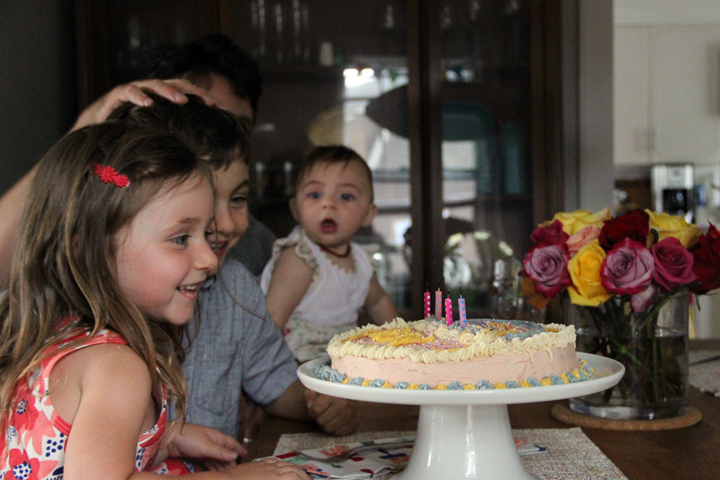 I am so proud of my spunky firecracker of a four year old. She is 'a handful'; quick tempered, hot headed, quick to slug anyone who threatens to stand in her way (no joke), yet she is also bubbling with enthusiasm, fiercely loyal to her big 'bwotha' and baby sister (when she squeezes her too hard and is reminded to be gentle, her reply is always, 'what can I say? I just love her so much'). She exhausts me and inspires me every single day. Cheers to my big girl, we all love you so.
Posted by Mama Smith at 10:54 PM 5 comments: