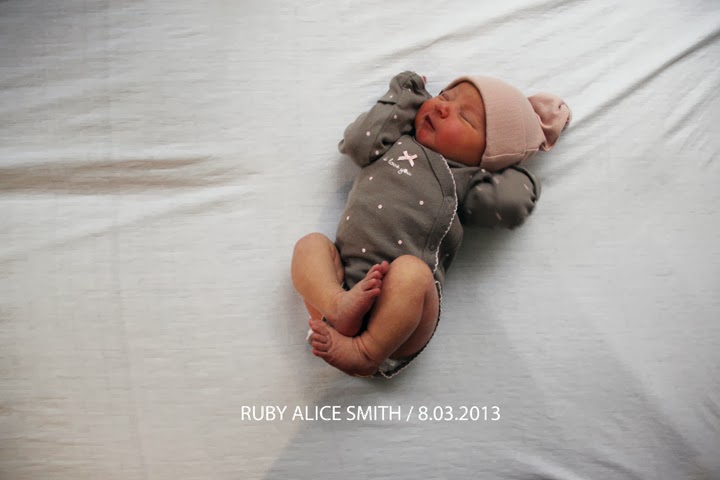 *It's been eight weeks since our girl was born, but I wanted to take a little time and get some distance before sharing her birth story. This little lady was a breeze compared to her brother!

I entered this pregnancy with a good degree of confidence that things would go smoothly, despite having developed high blood pressure with my first. I refused to give in to all of the worries that had plagued me as a first time mother, when every cramp or twinge had sent me to the internet, searching for all the 'what if's'. Carrying a baby is such a brief and amazing moment in life, and I was determined to be present and enjoy this time with my growing belly and growing baby. 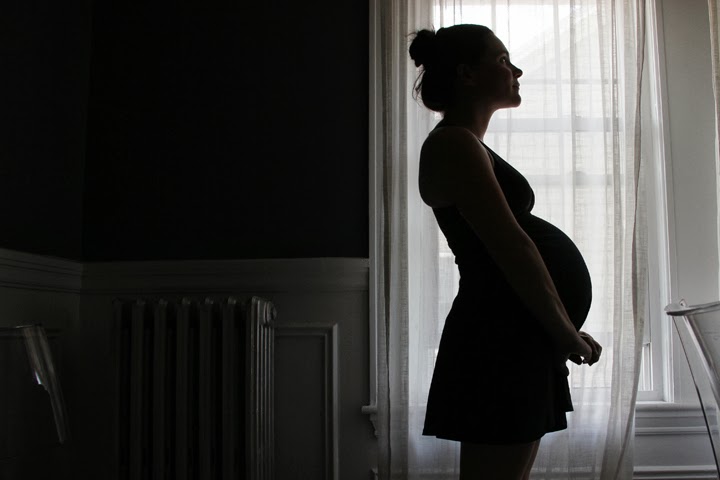 After an initial few weeks of giddy disbelief, I got introduced to the less glamorous side of pregnancy when I was slammed with some serious morning sickness. Juggling a toddler through the haze of nausea in the dark of winter wasn't easy, but I tried to keep the goal in focus. I also hoped that having such a different set of symptoms might mean avoiding the hypertension later (and also might mean a girl!!!).

As the days grew longer, my queasiness faded, and before I knew it I was in the sweet spot of the second trimester. I felt fantastic, the baby was healthy, and I did truly enjoy and appreciate the beauty of being pregnant. My confidence soared until I neared the 35th week, which was when my blood pressure had become elevated with my first pregnancy. Whether my anxiety somehow precipitated the hypertension (the doctor's claim it couldn't) or it was just coincidence, my fears were founded. I did develop high blood pressure, but this time it was in a range where bed rest was an option.

So I rested. I laid on my side, and read and sang to my toddler, and somehow our little family made it work... week by week. I was so grateful to have reached the point where the baby could be delivered safely if she needed to be, and I just tried to give her as much time as possible to grow. And then July ended and my due date neared. At 39 weeks my midwife felt that induction was the best option. I was 'favorable', although I actually don't remember how effaced or dilated I was, so we scheduled our induction.

I fed our son dinner, rocked him and put him to bed, knowing this would be his final moments as an only child. With my hormones soaring it was all more emotional than it really needed to be, but I was full of excitement, joy, and fear. My mother was there to stay with Little Smith, which gave me peace of mind. 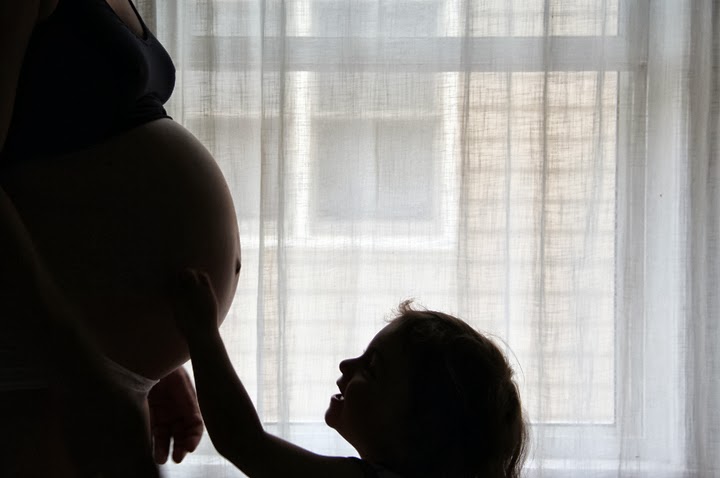 James and I arrived at the hospital just as the sky was getting dark. We didn't have the amazing view of the Charles River that we had enjoyed last time, but we settled into our room, expecting it could be a while. I had been having contractions on and off for weeks, but nothing intolerable. The midwife inserted a little pill to help topically thin the cervix, and then told us to get some sleep. The plan was to get me further along before starting on Pitocin in the morning. They rolled a cot in for James, who promptly passed out. I was offered sleeping pills so that I would have energy for all the work I needed to do in the morning, but since I have medicine phobia, I refused (thankfully as it turned out!).

Within an hour, I started to feel serious pain. I thought this was the cervix thinning and a good sign, but I knew that I had a long road ahead, so I tried to ride through it, breathing on my own in the dark for several hours. I still hoped to deliver without drugs, and that goal felt further from reach as I was already struggling. James lay sleeping on his cot next to my bed, and I breathed hard and clutched the bed. My breathing was so heavy that eventually I woke him, and he offered his hand for me to squeeze. As he realized how hard I was working, he asked if he should get someone. At first I said no, but then quickly agreed. 'I'm sure the answer is yes', I panted, 'but ask them if I'm supposed to be in this much pain'.

The nurse came in and turned on the lights, excited to see that I was clearly hurting and we were making progress. The midwife entered as I finished a contraction and I breathlessly told them I wasn't sure I could do this much longer. She calmly advised me that I would have a little break here and to get some water. I looked her in the eye and said, 'no, there aren't any breaks!' as the pain climbed again.

All of a sudden everyone sprang into action. James quickly folded and pushed his cot away and asked (as only a husband can!), 'is she in labor?'. The midwife chuckled and told him, 'looks pretty good to me', as she moved in place to check me...

...Before she could even get a look, I felt the burning and pressure of my baby's head and panted 'she's coming out!'. James was completely confused, our last delivery was slow and drawn out and this was all impossibly fast. They told me she was right there and to get ready to push. The pain was intense and frightening, but after a few pushes, it mercifully melted away and a tiny warm baby was on my chest. She looked up at me with wide dark eyes and I looked at James, we were both completely stunned and overjoyed. 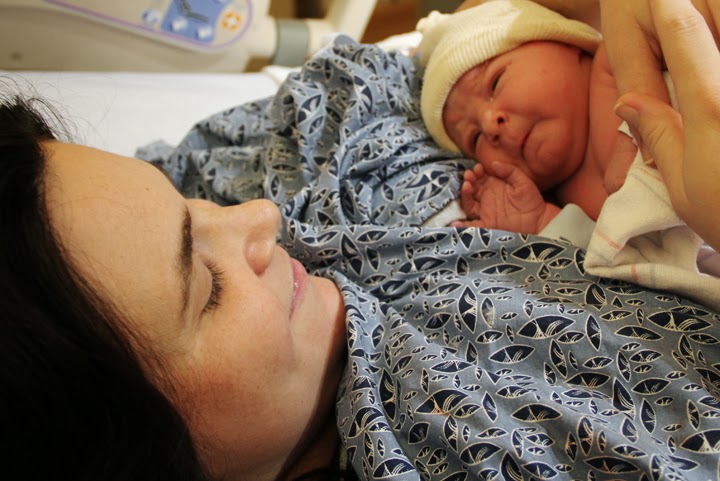 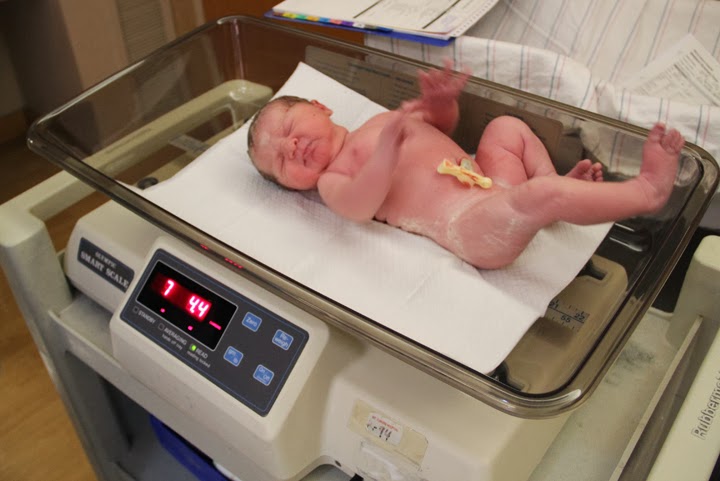 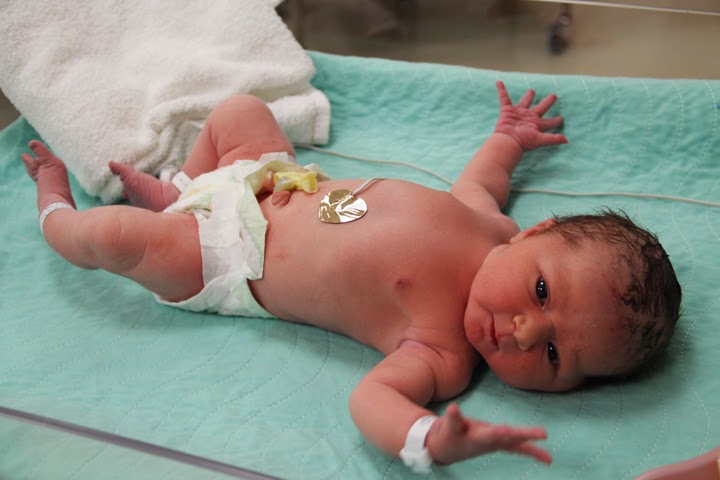 My hospital gown was still down and James asked if we could do skin-to-skin, adorably the only thing he remembered from our many natural childbirth classes three years ago. Our baby latched on right away and nursed with ease. James cut the chord and we spent some time there, just amazed that our little girl was here. Finally James took her to get cleaned up and I got stitched up (yes, that was the one common denominator in my two birth experiences). I felt amazingly well and completely fine to walk, but they were required to wheel me to the recovery wing. James was already there waiting with the baby, and we snuggled into our first night as a family... completely thrilled and surprised that it had all happened so quickly. 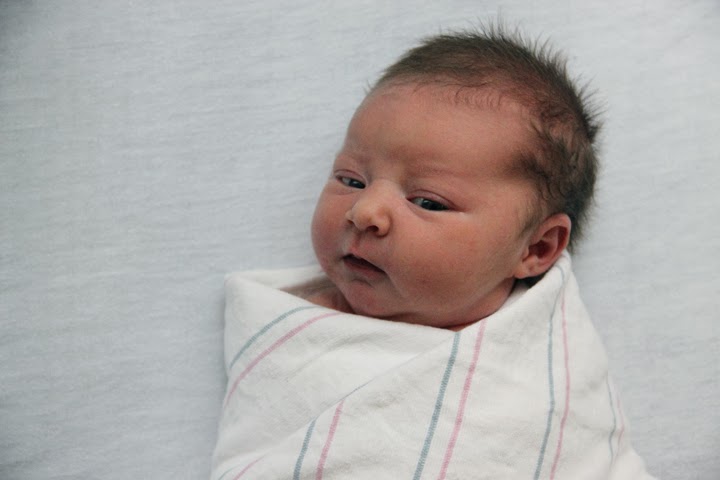 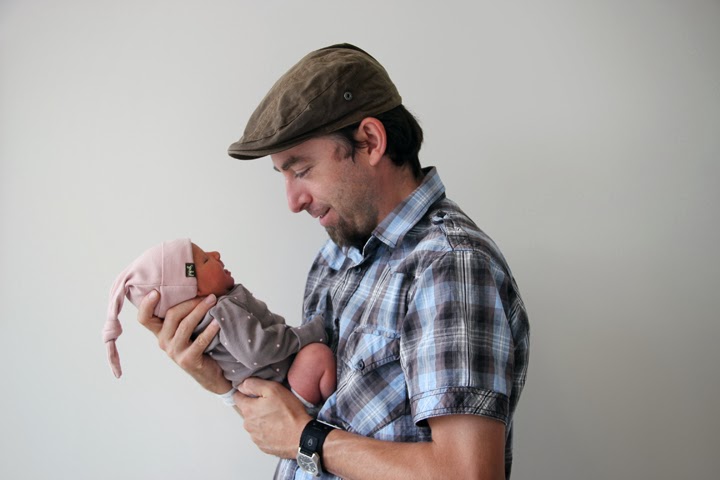 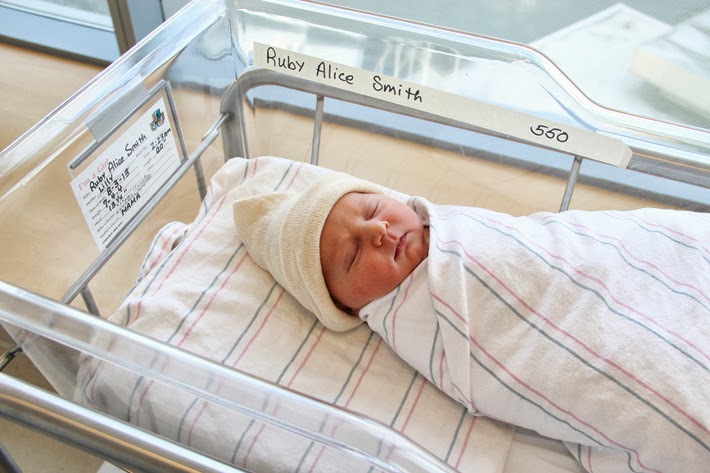 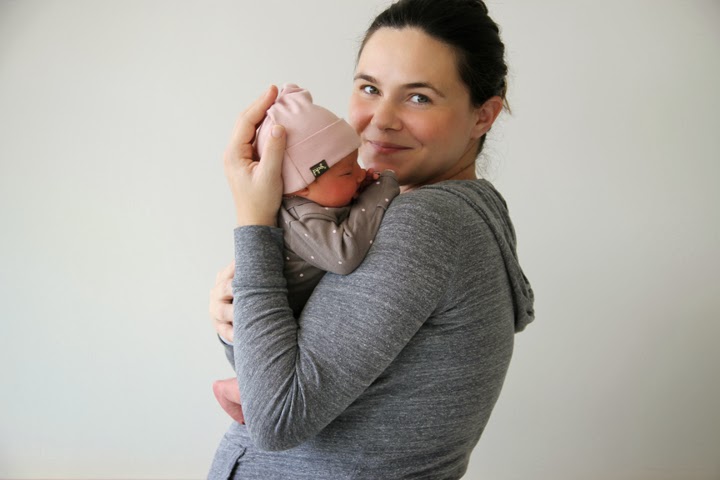 The next morning James went home and brought my mom and Little Smith to the hospital. I was so nervous about the first meeting, we had bought a small backpack and some plastic insects as a gift from the new baby to her big brother. The gifts were a big hit right away, but initially Little Smith sort of ignored the baby. He settled in with me and after about a half an hour, he started to sneak little glances and ask more questions. I breathed a giant sigh of relief when I could see he was going to adjust to all the change gracefully. 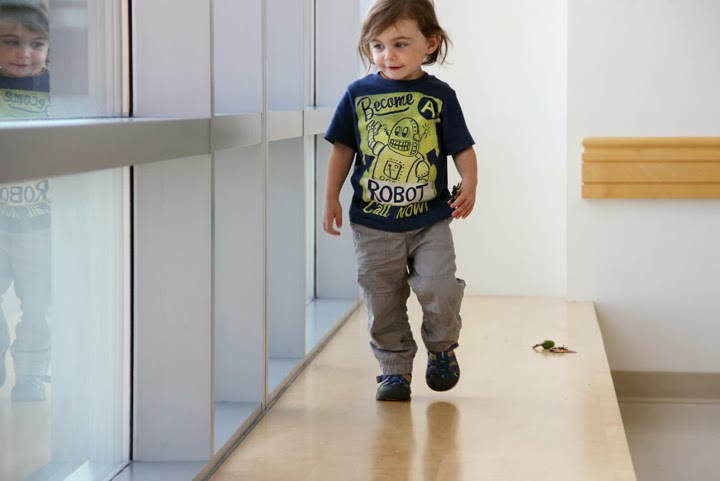 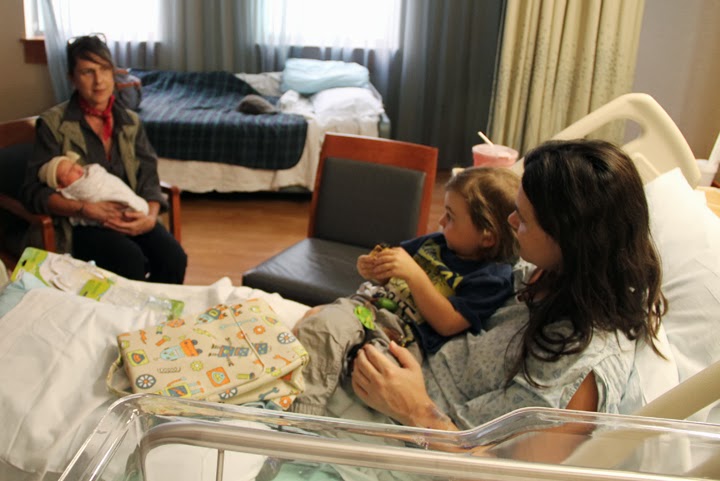 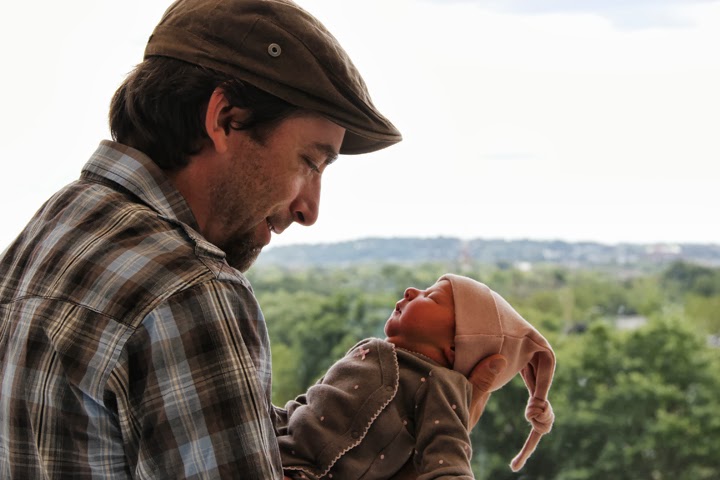 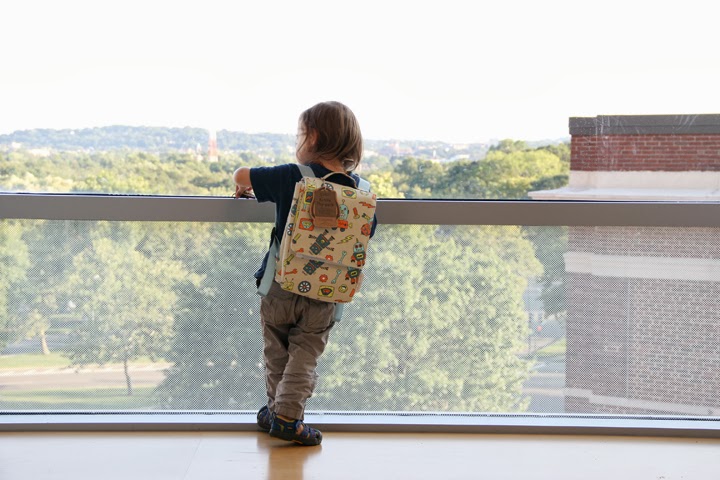 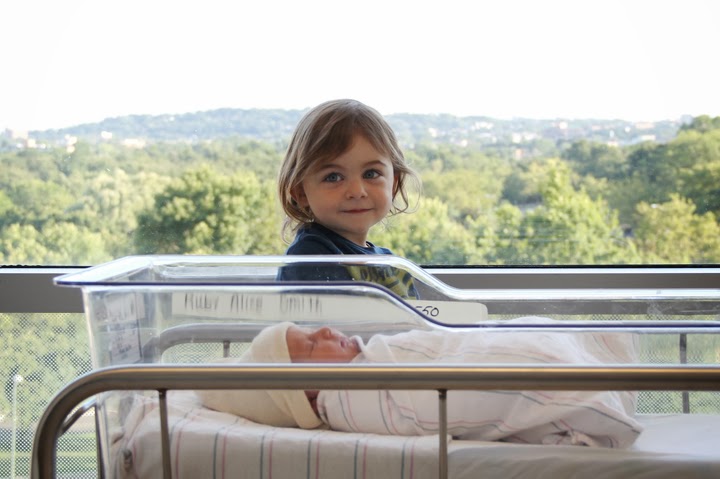 I was anxious to get home and we left the hospital a day early. We all snuggled and lounged as a family and it felt so good to be in our own home with our baby girl. Of course nothing can be quite that easy, we did have to go back to the hospital for light therapy to treat jaundice. It was a big drama for me to leave Little Smith again for another 24 hours (most of that drama I attribute to hormones). We were so lucky though, everything went smoothly and quickly, and either James or I was able to put Little Smith to bed every night through it all, which I think helped with the transition. 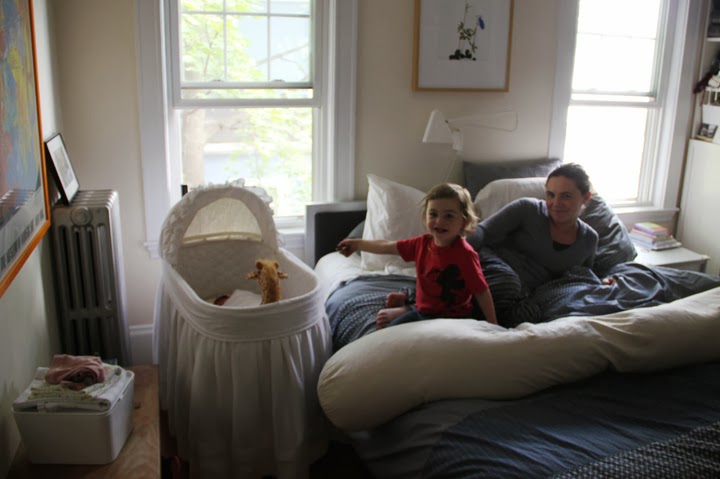 And just like that we were a family of four, with this beautiful, sweet, (dare I say easy!?) baby to call our own. We love you little girl. You are more wonderful than we could have imagined and we're already wondering how we got along before you joined our party!