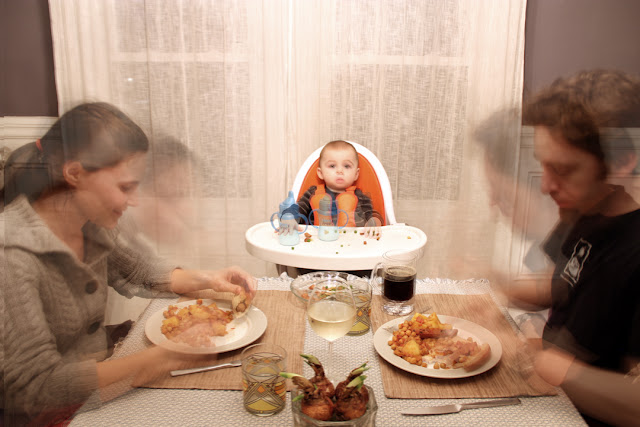 Growing up mealtime was never a structured event and nothing like what I saw pictured on television or at friends' houses. There was just my mother and I,  and while she enjoyed cooking and baking, eating was an activity where we did our own thing from very early on. Sometimes we would sit at the table or I would sit there alone, but more often I would perch on the end of my bed with a plate balanced on my lap in front of my very own black and white TV. I typically requested whatever I wanted for each meal. Luckily my mother is also an amazing gardener, so we had tons of fresh veggies and usually some combination of cheese and bread and beans. I ate pretty well, but on my own terms. I was never forced to sit until I was finished or to eat something that I didn't like.

Now that I have my own family, I've started to talk to some friends and read about the importance of the family meal. It seems like many people really do think it's a big deal and that skipping this ritual can result in everything from bad relationships with food and diet to being more likely to try drugs or not finish college... that's a lot to load onto gathering at a table! Still many of my friends believe it's important enough that their husbands do find ways to be home for a 6PM daily dinner.

For our little family eating together during the week just doesn't work. Big Smith works crazy long hours and doesn't get home until Little Smith is already asleep. They spend some time together in the morning and have breakfast but I don't come to the table because... well I'm sleeping or just lying there enjoying my one half hour to myself. I have thought about trying to get up and do breakfast as a family but selfishly I also do cherish that short time in bed alone (or really with the cat). At lunch Little Smith and I eat at the table, just the two of us. I'm not sure that he really cares whether we're sharing a meal but I do make an effort to set this routine. 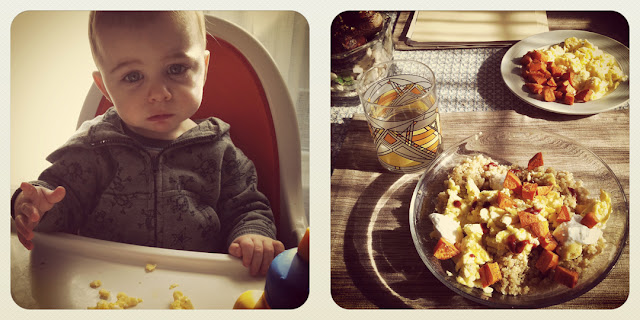 Our only time for family meals is on the week-end. It is fun to sit at the table all together and have food thrown at us share some food. It's also nice not to have to clean up and heat things up twice, so I do get that it makes sense on a lot of levels, but it's logistically really hard for us.

I have some guilt and concern over whether we are setting the tone for bad eating habits by not having more structured meals. I debate whether I should ask Big Smith to get home early a few nights a week... but I also know that would put a strain on him and the way that he works and I'm just not certain that it's worth it - yet. And although among my friends we are the exception, I know we can't be the only family skipping dinner. I think about fathers or mothers who travel all the time for work or who are in the military and don't share dinner together each night, but somehow are still raising well adjusted kids. I also reflect on my own life, I had the most loosey-goosey childhood mealtimes and my relationship with food is wonderful- I would say it's healthier than average. I didn't get into drugs, I did finish college and even grad school... either the family meal wasn't key for my development or possibly I could have gone that much further with some communal breaking of bread (oh if only!). 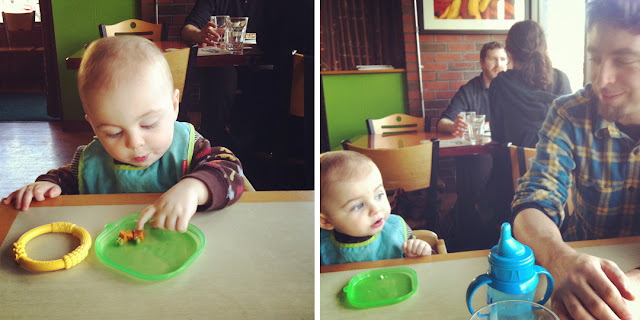 When I step back, what was important for me and will be important as we raise our son is providing time and opportunity every day to communicate. I didn't talk to my mother during meals but we did talk, sitting on the floor painting with watercolors or digging in the garden... we had daily rituals, they just weren't about eating. I've started to lay out similar routines for Little Smith and as he grows those will change. I'm certain that we can create a family open and connected enough that communication does happen- even if it's on the go instead of sitting down.
Posted by Mama Smith at 11:39 AM