Birth Story: A Smith is Born 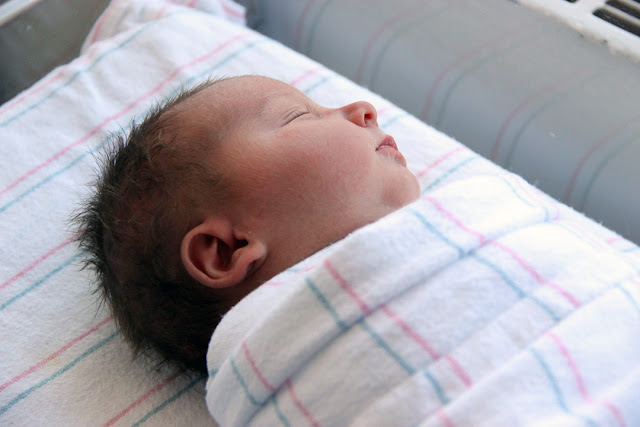 Since I started this blog shortly after my son's first birthday I have never had the chance to write about his birth. This is one of the first posts that I drafted but it's been very hard to compose; hard to know what details to include and what to leave out, hard to relive a very long, frightening, and ultimately joyous experience, even hard to look at the photos of my beautiful newborn and to feel the deep swells of love and also protectiveness they stir in me.

My hope had always been to have a completely natural childbirth. I don't like hospitals or doctor's offices and while I have profound respect and gratitude for the medical field and recognize that they have an invaluable role in helping all of us, my vision of giving birth was a natural experience as far removed from a medical procedure as possible. That just wasn't in the cards for us and in the end I am so grateful to all of the doctors, midwives, and nurses who made our very un-natural childbirth possible. 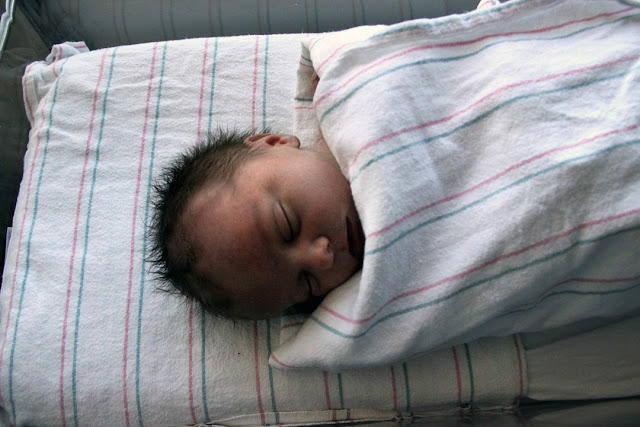 I loved being pregnant. After a few hiccups early in the first trimester, most of my pregnancy was very easy and uneventful. I felt great and was fairly active, working long days, camping, practicing yoga. We took natural childbirth classes and after a lot of debate and research decided to work with a group of midwives affiliated with a nearby hospital. I was gaining weight normally, the baby seemed healthy and we didn't anticipate any complications.

As I neared my eighth month I went in for my normal check-up and my blood pressure was very high. It was such an extreme jump from my typical readings that there was concern. They monitored the baby's heart-rate and observed me for several hours and finally released me with a follow up scheduled a few days later. I don't think I really understood the seriousness of the situation at that point, and I know that James (soon to be Big Smith) didn't get it either. The next week I left work for another check-up expecting to be back in an hour but I never returned to work.

My blood pressure was so high that the doctors wanted me to be admitted for immediate induction. We freaked out. The last thing we expected was to be having this baby already after so many warnings that first babies are late. Also the idea of an induction, especially one this early, was not at all what I wanted for my baby's birth. 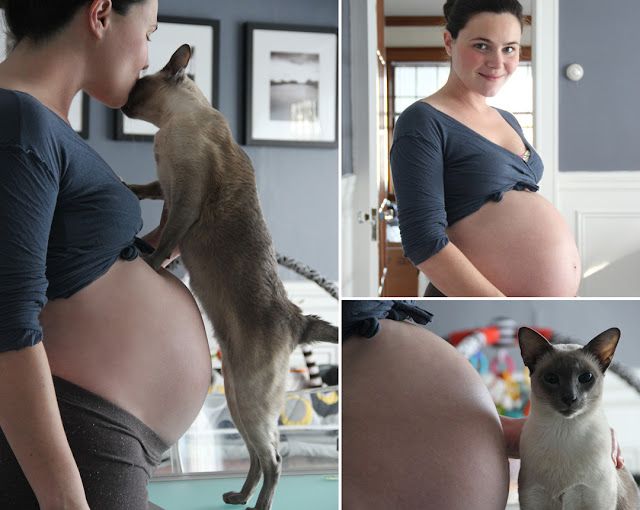 The midwives advocated for me to be released on bed rest at home and I was granted that for one week-end.The photos above are from that week-end, eight months pregnant and feeling healthy and strong and not at all ready to deliver my baby. I lay on my left side trying to keep my blood pressure down and hoped and prayed that everything would be alright.

Monday came and this time it was clear I wasn't going to be released from the hospital until I had delivered my baby. My blood pressure was dangerously high and there was a very real risk that I could have a seizure. I had pregnancy induced hypertension and it was likely that I would develop preeclampsia. My life was at risk as was the baby's and we would need to induce immediately.

It was a very long induction and there were too many twists and turns to document. Our baby was happy and not ready to be born and he kept me tethered to a hospital bed waiting for many days. Unlike the recovery beds, these beds are made for pushing and women don't usually spend that long confined to them. It was the most uncomfortable experience; being given powerful contractions, forced to lie motionless on my side to control my blood pressure, pumped full of fluids, and having a catheter for days. 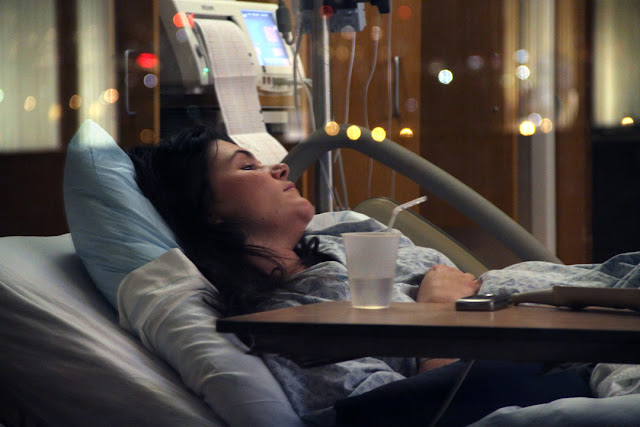 There was also good. James was amazing, the staff was wonderful, we had a beautiful view of the Charles River and a steady soundtrack of the baby's heartbeat along with an endless stream of paper graphs spilling from the monitor. I just kept repeating, "our baby is healthy" and I knew that we were lucky and it could be much worse. 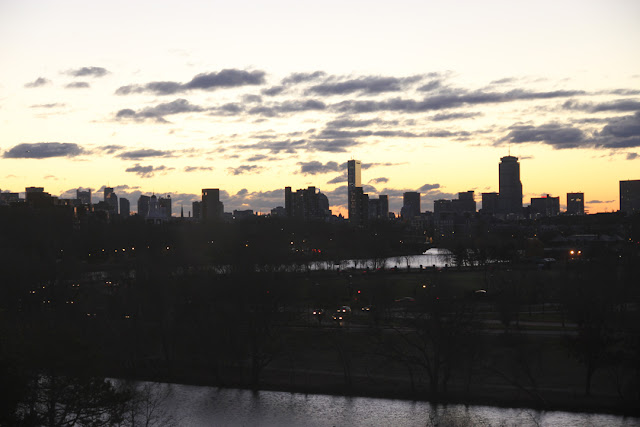 The sun rose and set and rose again. There was talk of a c-section which I did not want. Finally they broke my water manually and everything started progressing quickly. I had to receive an epidural in order to lower my blood pressure but the pain was still intense and I was exhausted from everything.

It was time to push and I could literally feel my heart beating out of my chest each time I did. My heart rate was peaking to a dangerous place and they gave me oxygen between contractions. James encouraged me but looked frightened and I knew that if I didn't deliver this baby soon that I would have to have a c-section after all of this. So I pushed with everything that I had and out he came, much faster than expected. Our Little Smith, was born on November 25, 2010. It was Thanksgiving night. He was beautiful and looking into his wide eyes was the most intense connection I have felt in my life. 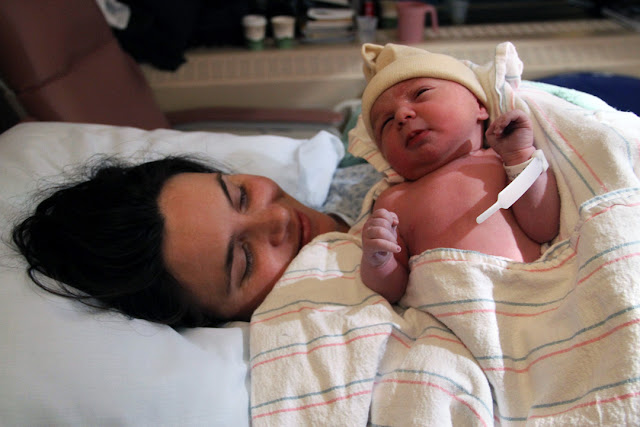 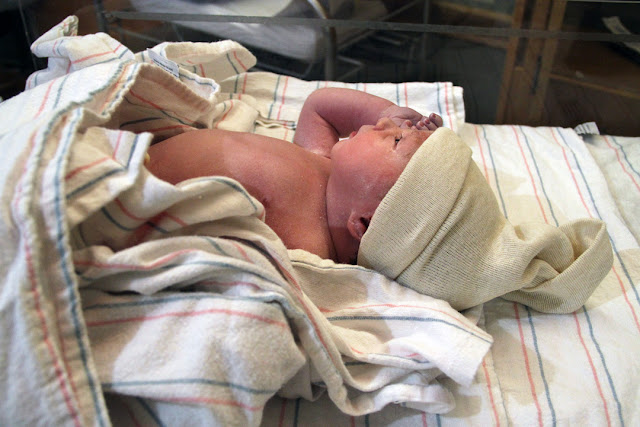 He spent a few hours with us and I tried to nurse but his glucose levels were low and they needed to give him sugar water to stabilize him. I also needed some repairing because... well his hand was up by his head when I pushed him out and it wasn't the smoothest exit. 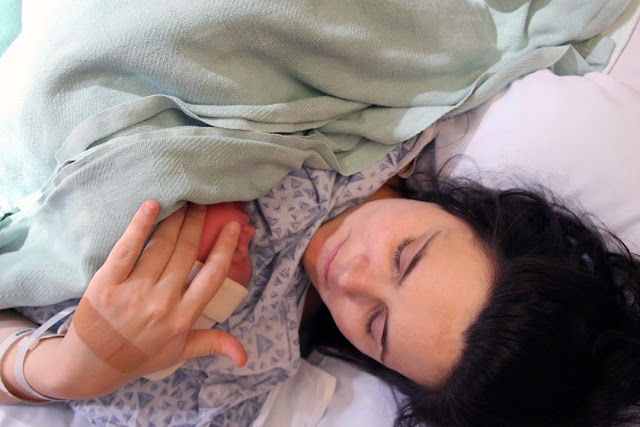 James stayed with baby and after my surgery I ate pumpkin pie and passed out alone in the delivery room. I still can't believe I ate that pie. 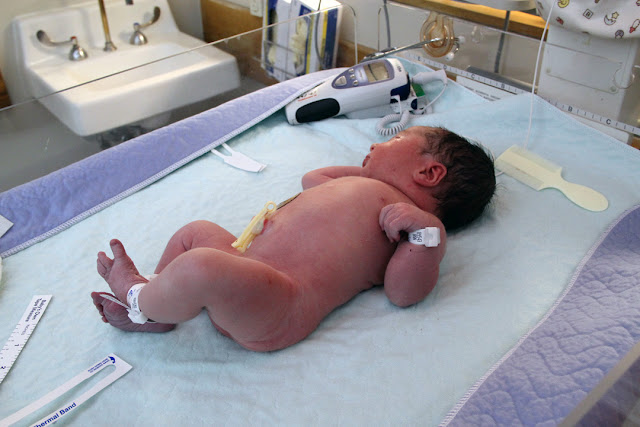 We were moved to the recovery wing and they determined that baby was going to need a glucose IV and formula and wouldn't be able to stay with us. They brought him to me in bed, swaddled in fleece blankets, and lay him in my arms for a few minutes before taking him away. I was heartbroken to be separated from him and it was a very strange feeling to lie there hooked to a million machines, no longer pregnant and without my baby.

Nurses came into the room every few hours throughout the night to monitor my blood pressure. James woke up for each of the feedings and went to the nursery while I was confined to the bed. He gave me reports and I was told that I could be mobile in the morning and go to the nursery to be with my baby. 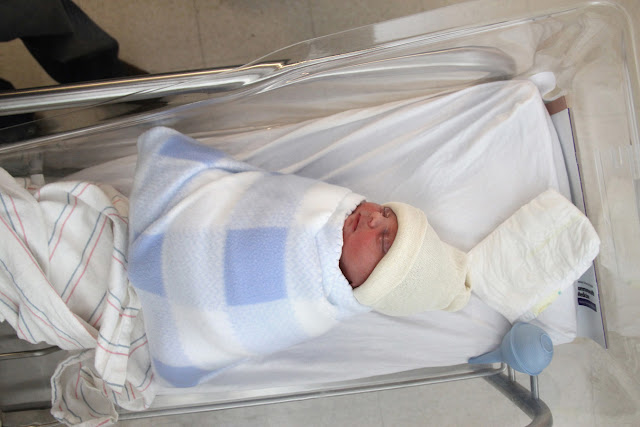 The next day things got worse. My blood pressure was still incredibly high and I needed to be put on a magnesium drip for twenty-four hours to prevent a seizure. Baby still needed to be in the nursery so I was allowed to waddle down the hall to see him one time before being separated for another day. It was the most pain I have ever felt in my heart. I know so many mothers give birth to babies who are very premature and stay in the NICU for months and I don't know where they find the strength.

The drip was awful and I felt like I was going crazy. I was an emotional wreck being separated from my baby and hooked up to so many machines. I was also pumping diligently to get my milk to come in so that I would be able to breastfeed once all of this was over and through the haze of the magnesium, I truly thought I was loosing my mind. All I wanted was to be with my child. 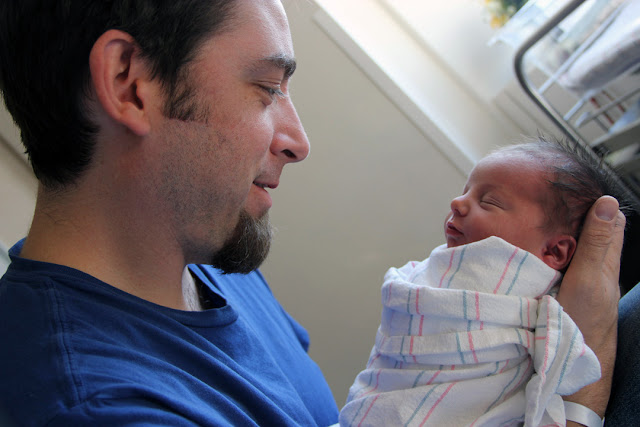 James did his best to divide his time between his new son and his delirious wife. He was wonderful and as terrible as this circumstance was, it did allow him to bond with his baby early on in a way that I don't know is always possible with the primary bonding of the mother. 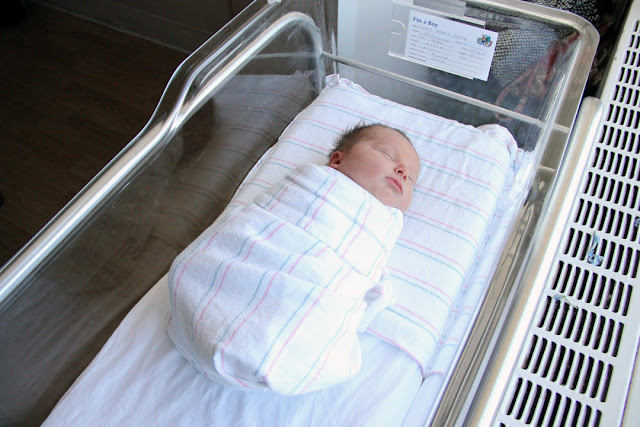 Things got better. The magnesium drip was shut off. I was unhooked and unwired from all of the contraptions and put on a prescription to control my blood pressure. I was able to be with my baby in the nursery and to feed him. Finally he was released from the nursery and joined us in our room, although he had to lie under black lights because of jaundice so we still couldn't hold him close all the time like we wanted. Still it was wonderful to hold him for feedings, change his diapers, and hear him breathing by my bedside. 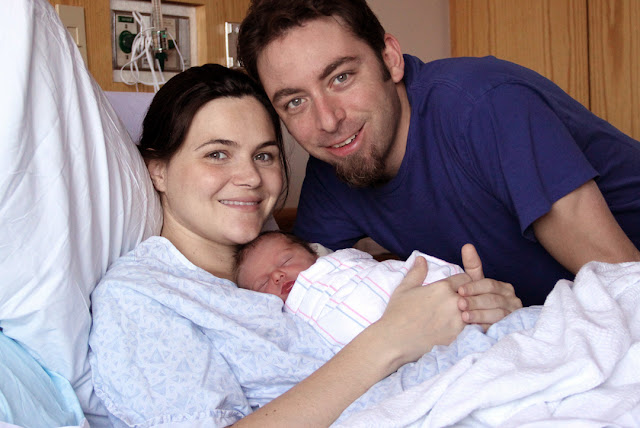 As soon as his jaundice cleared we smothered him with love and kisses and didn't let him leave our arms for months. Many of the doctors and midwives worried that I would have postpartum depression because I was so emotional when we had been separated.  I truly think it's normal to have some postpartum depression and most of my friends who are close enough to confide in me did experience some of those feelings on a very small scale. For whatever reason, I never did. I realize that it's largely chemical but it was almost as though I had been so pained and despondent during that time in the hospital that I had nothing left but love and an intense need to be bonded to this baby and not let him go. 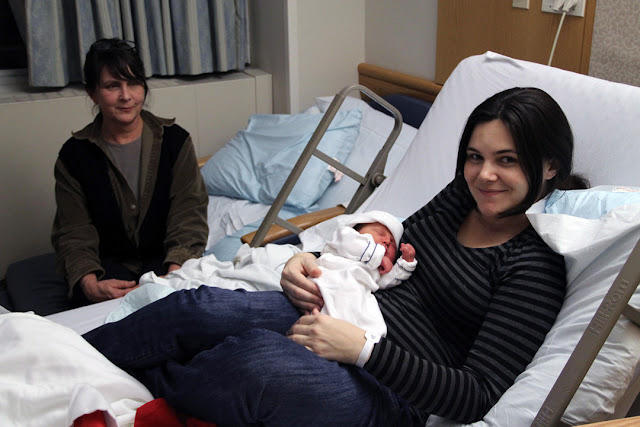 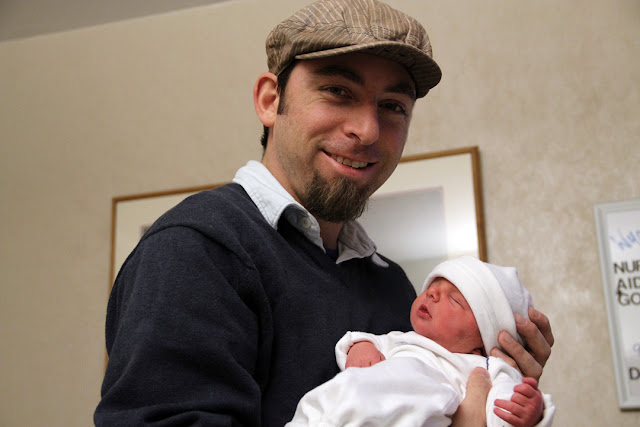 We were finally told that both baby and I were free to leave the hospital and after being in there a few weeks and not once stepping foot outside I couldn't escape fast enough. My mom joined us and it was night when we were finally able to leave. The seasons had shifted while I was cooped up and the air was cold and wintry. My baby looked so fragile out in the real world. We went home to sleep in our own bed, a wonderful feeling even though there wasn't much sleeping. I was still puffy from fluids and in some pain, but I was deeply happy. 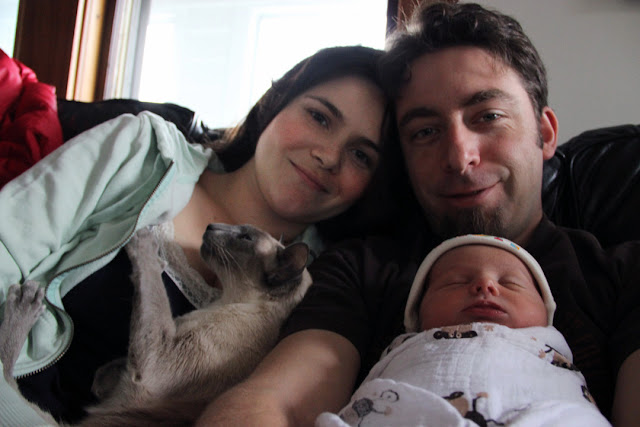 This birth story is not at all what we had planned for or expected. It was far from natural and not ideal. Still, I feel blessed that life worked out so beautifully and I cherish this story as one of my most dear. It's the story of the birth of my son and the birth of my family; Mama Smith, Big Smith, and Little Smith. I'm forgetting details over time so as tough as it was to go back over these memories, I'm happy to have done it... and happy to be done with it!
Posted by Mama Smith at 10:21 PM